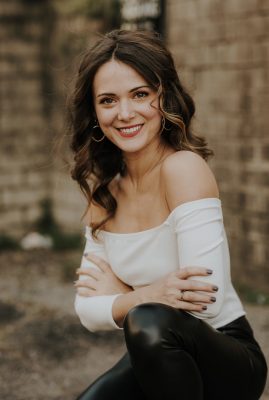 Catherine Kelly (MM), is a classical soprano and voice teacher from North Carolina.  Catherine’s work began abroad in 2014, when she performed as a guest soloist in the Mittelsäschisches Theater Chamber Concert Series, featuring engagements in various cities around eastern Germany. In the subsequent season, she performed as Susanna in a 180-performance run of Mozart’s Le Nozze di Figaro at the Palais Baumgarten in Vienna, Austria. Catherine was a founding member of the internationally-touring chamber trio Ensemble Poetico, and she appeared in prestigious music festivals in Germany, including Palais Sommer in Dresden and Mittelrhein Musik Festival in St. Goar. She is now currently based back in North Carolina, where she has featured in various sacred masterworks, including Mozart’s Reqiuem, Handel’s Messiah, John Rutter’s Requiem, Bob Chilcott’s St. John Passion, Fauré’s Requiem, and Bach’s Christ lag in Todesbanden.

Catherine is the founder of Sidewalk Opera, a non-profit organization that provides “pop-up” classical music concerts for surrounding communities and helps provide musical instruments for lower-income families. She is a retired company member of Sweet Tea Shakespeare, where she held the title of Master of Song and worked both as a performer (memorable roles include Eve in Paradise Lost, Celia in As You Like LIT, and Anne Page in The Merry Wives of Windsor) and behind-the-scenes as part of the music production team.

An active member of NATS (the National Association of Teachers of Singing), Catherine offers private lessons to voice students. Her students have received acceptance into competitive university music programs, musical theatre programs, the Spoleto Music Festival, the North Carolina Honors Chorus, and summer intensive workshops. She teaches group voice classes and private lessons at Ravenscroft School (where she holds the title of Artist in Residence) and North Raleigh School of Music.

Catherine currently resides in Durham, North Carolina, where she is a staff singer at Duke Chapel.