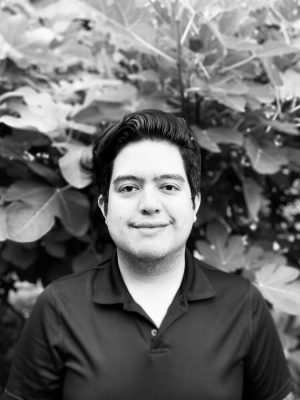 Antonio Alanís is a Mexican-American artist raised in Durham, North Carolina. His non-profit management and teaching background interest enable him to use the visual arts to build bridges between diverse cultures. He uses his Mexican-American background, education formation, and passion for the visual arts to create cultural awareness about Latin American people in the South. The intersection between Latin-American art and activism motivates him to use the arts as a conduit to strengthening his Hispanic/Latinx community in North Carolina.

He seeks to strengthen the connection between people of all backgrounds; Antonio uses the visual arts to explore themes such as “Belonging,” “Growing up Latino,” “Home,” and “Identity” in a multicultural South. As an acrylic and oil painter, he enjoys portraying uplifting Latinx characters that celebrate the cultural richness, beauty, and humanity of Latinx people through painting and graphic designs. A visual storyteller, he enjoys using the arts to springboard conversations centered around cultural similarities rather than differences between groups of people.

Antonio Alanís is an artist and educator living in Durham, North Carolina. His immigrant background, personal history, and education inspired him to explore themes such as social justice, identity, and immigration in North Carolina. He believes that the visual arts are an integral part of promoting cultural awareness about Hispanic/Latinx people in the United States.