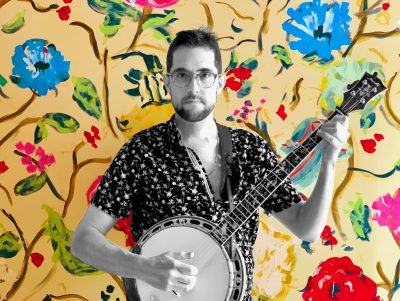 Joe Troop is a multi-instrumentalist, singer, and songwriter hailing originally from Winston-Salem, North Carolina. The founder of GRAMMY-nominated stringband Che Apalache, Joe’s music is deeply inspired by his decade living in Buenos Aires and traveling throughout Latin America.

When the pandemic unexpectedly landed him back in North Carolina, he spent 2020 learning direct action from stalwart organizers. In 2021 he channeled that energy into his homecoming album Borrowed Time. The record was co-produced with Jason Richmond (The Avett Brothers, Branford Marsalis) and features luminaries like Béla Fleck (who produced Che Apalache’s GRAMMY-nominated album), Abigail Washburn, Tim O’Brien, and Charlie Hunter, but the visceral songwriting and fine-crafted instrumentals speak for themselves. Joe’s music reflects both his time spent living abroad as well as his upbringing in the North Carolina Piedmont.

Now based in Durham, he leads various ensembles, which play his original music. Joe has also most recently partnered with powerhouse Venezuelan folk music legend Larry Bellorín. The duo is on a mission to show that music has no borders and is already touring extensively.