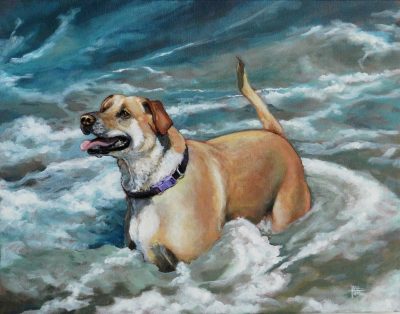 Matt Tomko was born and raised in Northeastern Pennsylvania and has always had a passion for nature and wildlife. He started drawing in order to keep some small part of it with him. As a child, he used to catch birds and small animals for the same reason. He had this little boy’s need to literally hold on to nature any way that he could. Because of his intense connection to the natural environment, Tomko strives to represent it as he experiences it. He starts with an under-painting, often in acrylic, to work out composition and values before applying final layers and the appropriate tints and strokes to create details. Painting in a style that has been described as Fine Art Illustration, he sometimes spends hours on fine details in feathers, branches, eyes, or leaves. Working in acrylic and oil is very forgiving and allows him the flexibility to change details until being satisfied with the feeling they create. He blends or glazes colors that are often seen only in the extreme light of morning or evening because those times of day evoke a special feeling for him. Matt’s goal as an artist is primarily to convey those feelings by connecting with that part of the viewer that feels they have been somewhere or seen something similar, can smell and feel the air and hear the sounds, and is excited about feeling that way again. By providing the viewer with fine details, he seeks to give them more than an overview if they desire it; Striving to provide them with a pleasing composition when seen from a distance, but then a visual indulgence when they come closer to see more. A sparkle in a bird’s eye, a shadow through a leaf, or petite feathers around a beak are available for those who want to see things up close while the color, mood, and light of a special place and time are available to all.
Matt studied art seriously in his mid-teens under the direction of Judith Keats. He experienced early successes in winning competitions and held his first solo show at age sixteen. However, life took him in other directions for a long period after that time. He received a BA in Mathematics from King’s College in Wilkes-Barre, Pennsylvania and worked in various Engineering and Manufacturing Management roles for more than twenty years creating art only occasionally during that time. In 2005 Tomko renewed a serious interest in art, took up his brushes and oil paints, and once again studied under the direction of Judith Keats in Pennsylvania. He moved to North Carolina near the picturesque Eno River in 2009 and since then has pursued his passion even more earnestly. Art became his profession as well as his passion and he now maintains a studio in the Golden Belt Art Complex in Durham North Carolina. His work has been extensively exhibited in juried, group, and solo exhibitions and is held in private collections both nationally and internationally. Matt was accepted into the North Carolina Wildlife Artist Society in 2011.
Being inspired by nature and wildlife, Matt regularly visits our treasured parks and wildlife refuges for inspiration. His trips have included Yellowstone, Yosemite, Grand Teton, Acadia, Shenandoah, Great Smoky Mountains, Olympic, Rainier, North Cascades, Congaree, Sequoia and Everglades National Parks, Alligator River, Forsythe, Cape May, Loxahatchee, and Merritt Island National Wildlife Refuges as well as state and local parks too numerous to mention. He creates art in order help more people recognize the need to continue preserving these special places and views our natural places as national treasures.